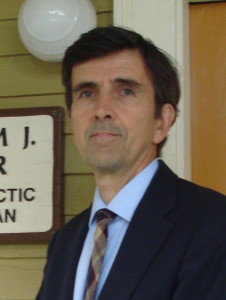 Dr. William Schneider has been a licensed Chiropractor since 1984. His first four years of practice were in Atlanta Georgia where he worked in a busy clinic seeing thousands of injured auto accident patients.  Here he treated a  wide variety of very seriously injured patients. This experience prepared him for his current  role of treating a wide variety of injuries while looking at the whole person in assessing their health needs.

Dr. William Schneider has been freeing people from pain since 1994   in the NE Portland area-currently at the medical/dental  clinic on Wasco St just  off 102nd and Halsey.  As a Oregon Chiropractor with 36 years experience, Dr. Schneider is  committed to promoting the health and well being of his patients.

Dr. Schneider uses a “whole person approach” when taking care of his patients. By combining  cutting  edge chiropractic technique  with state of the art physiotherapy procedures Dr. Schneider is able to help you to accelerate and/or maintain your journey to good health.

Dr. Schneider was raised in Portland Oregon and attended  Central Catholic High School – graduating in 1967  with high honors. After attending college and graduating in 1975 ,  Dr. Schneider spent five year building  and remodeling homes in the Portland  Oregon area. After a life changing injury to his back in 1978(see story below) Dr. Schneider decided to study to become a chiropractor  at Life University in Marietta , Georgia. He graduated in 1984 and practiced in Georgie and Alabama for 7 years. In 1991 he grew weary of the humid southern climate and decided to move with his wife and son back to his home town of Portland Oregon.  He has never regretted this decision.

Dr. Schneider has 36 years experience as a chiropractor and has been continually licensed by the Oregon State Board of Chiropractic Examiners, in good standing, since 1991. Dr. Schneider  has successfully treated thousands of injured patients  in the  Portland-Metro area since opening his practice back in 1991.  He acted as the team chiropractor for the Central Catholic HS Football team for many years while also helping treat girls on the Central Catholic  HS Basketball team.  In his spare time he is an avid hiker and enjoys playing tennis, walking  and relaxing with yoga.

Dr. Schneider is often asked why he became a chiropractor. He always loves to give his answer by telling his chiropractic miracle story. “When I was about 16 years old I began experiencing severe and persistent migraine headaches. I suspect they were caused by a combination of a severe sledding accident and football injuries. I continued to have these headaches for eleven years. Hardly a week went by without a severe headache episode. I graduated from college and worked successfully in my own business as a home builder and re modeler.  After about 5 years I injured my back lifting a live Christmas tree. After several months of no results with traditional medical care I went to a Chiropractor in desperation. To my great surprise not only did the chiropractor help me with my back pain but he also  helped eliminate my stubborn headache syndrome. It was not long before I decided that Chiropractic would be an exciting and rewarding career for myself. I wanted to see miracles in other folks just like I had experienced with my back pain and headaches.”

Dr. Schneider is currently certified as a Fellow of  Chiropractic Biophysics and The Nimmo Technique.  He is also Certified as a Healthexcel Metabolic Type Advisor.  . These techniques allow Dr. Schneider to provide complete holistic care for a wide spectrum of Portland /Oregon/Washington residents. Dr. Schneider does not see a high volume of patients-preferring to take his time with each patient  so that he can deliver the best care possible.  Because he spends more time with his patients he is often able to help people who have not found relief anywhere else.. After treating literally thousands of auto crash patients and sports injuries over a span of 36 years he has gotten pretty good at solving tough cases.
Dr.Schneider and his employees are fully devoted to help you achieve optimal health. Our first priority is to bring you relief from your pain or discomfort as quickly as possible using state of the art safe chiropractic care.
Call our office today to set up a free consultation with Dr. Schneider.